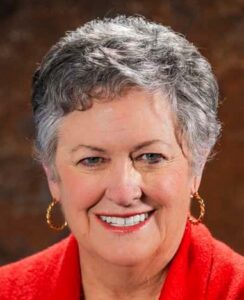 Terri Burke has been Executive Director of the ACLU of Texas since 2008. In those years, the Texas affiliate has grown from a staff of seven to a staff of 70. Headquartered in Houston with offices in Austin, Dallas, El Paso and Brownsville on the border, the ACLU of Texas has been a leader in supporting immigrant rights, criminal justice reform, voting rights and in holding the line in the Culture Wars battles at the Texas Legislature. Instead of law school, her “postgraduate work” after the University of Texas was in reporting on how the sausage is made in two very different state legislatures; as a business reporter covering a boom and a bust; and as a senior editor and an editor-in-chief, leading two different staffs to Pulitzer Prizes. A native Houstonian, her newspaper career took her through Dallas, Austin, Albuquerque, Abilene (Tx) and Hartford, Ct. She served on the boards of Planned Parenthood of West Texas, Freedom of Information Foundation of Texas and the Day Nursery of Abilene (a non-profit preschool and day care). Burke served for 10 years on the board of the Texas Association of Managing Editors, including a two-year term as President, and five years on the board of the Nonprofit Management Center of West Texas, which served nonprofits in 24 West Texas counties, including a three-year stint as board president for an organization that provides resources, training and support for nonprofits ranging from direct service providers to arts associations and museums and civic engagement organizations. She is married with two daughters, one son-in-law and a practically perfect in every way granddaughter.

Update: Mustafaa Carroll will not be able to serve as a Pacifica Director if the bylaws are adopted

Louis Vandenberg is the longest serving career broadcast professional within the University of California system.  He marks his beginning in broadcasting at age 14 when his mother drove him to KPFK to volunteer, in the same building it currently occupies.  This initial exposure to KPFK began a lifelong on-and-off relationship with the station and Pacifica. He has held a variety of positions, ranging from Hollywood recording studio design, to longtime KPFK producer, to major label record producer, as well as other positions.  He is the longtime Director/General Manager of UC Riverside’s KUCR, cited in the Washington Post in 2017 as #2 Best College Station in the United States. KUCR is a Pacifica Radio Affiliate. Vandenberg holds memberships in various organizations, including National Association of Broadcasters, Member California Broadcasters Association, the Audio Engineering Society, and a number of others.