Click on names below for more information about each person

Update: Heidi Boghosian, volunteer co-host of a long-running show on WBAI, will not be able to serve as a Pacifica Director if the bylaws are adopted. As provided in Article 15 Section 1 of the bylaws proposal, the other four At-Large Directors will choose her replacement from one of the three Alternate Transition Directors before the first meeting of the new board.

“I will be unable to serve as a Pacifica Director if these bylaws are adopted. When I initially agreed to be included, I understood that staff were precluded from serving, but I misunderstood the time frame for quitting Law and Disorder, the show I’ve co-hosted for 16 years. At this time, given various developments, I do not feel right abandoning the program that airs on 125 stations.

To be clear, I support the need to restructure Pacifica, to enact these new bylaws, and to try new ways to ensure long-term viability of the network. The work of the five listener-supported stations comprising Pacifica’s network are critical in sustaining a radical perspective on domestic and international current events.” 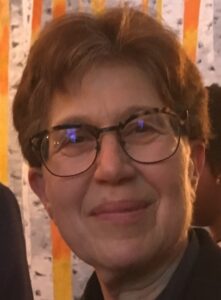 Judy Graboyes has worked in the financial arena for over 30 years, doing accounting, asset management for affordable housing, and community development lending. She previously served as treasurer and on the audit committee for two Bay Area boards of directors; Conard House in San Francisco and Pie Ranch in Pescadero.

She has a Bachelor of Arts in Management from St. Mary’s College in Moraga, CA and a Master of Real Estate Development from the University of Southern California. She has dedicated her career to affordable housing, and  is also a musician, activist, and event producer. 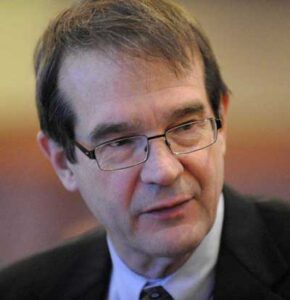 Bob King, retired President of the United Auto Workers, like all UAW officials started out as a worker on the shop floor and worked up through the ranks.  Bob was a skilled tradesman from Local 600, the notorious Ford River Rouge Plant. All through his career King was actively supporting and building organizations of international worker solidarity and direct united action of workers in solidarity with each other.

Known for his activism and passionate belief in social and economic justice, since retiring King has remained very active in social justice causes in his community and globally.

He has been a visiting researcher at the University of California, Berkeley, he co-taught a seminar for both undergraduate and graduate students on “Labor and the Global Economy”, and currently is a Lecturer at the University of Michigan teaching the importance of collective action and collective bargaining in winning greater economic equality in the US and the world.

In 1990 King led delegations to El Salvador to support trade unionists and church members who were victims of a long campaign of deadly bombings, death-squad murders and disappearances carried out by Salvadoran military officers trained by the U.S. military’s School of the Americas in Ft. Benning, Ga. King has long been involved in efforts to close the school because its graduates use the training received there to terrorize religious activists, community activists, trade unionists, and political activists in Latin America.

During King’s term as UAW President he assigned UAW organizers to work in Mexico with workers, students and independent unions to organize automotive facilities in Mexico.

In his earlier life, he joined UAW Local 600 in 1970 when he was hired at Ford’s Detroit Parts Depot and began his electrical apprenticeship in 1972. King, a member of the UAW International Skilled Trades Advisory Committee, was elected vice president of Local 600 in 1981 and president in 1984. He was re-elected in 1987 and was twice elected chair of the UAW-Ford Negotiating Committee.  While at Local 600 King was active in the fight to end apartheid, the successful campaign and legal action to open Dearborn parks, support for UAW Colt strikers, and many other social justice fights.

Update: Barbara Ransby will not be able to serve as a Pacifica Director if the bylaws are adopted.  As provided in Article 15 Section 1 of the bylaws proposal, the other five At-Large Directors will choose her replacement from one of the three Alternate Transition Directors before the first meeting of the new board. 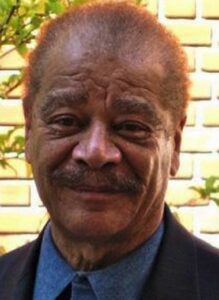 Walter Riley is a lawyer practicing criminal defense, civil rights, and police misconduct. Growing up in the Jim Crow South lead to activism very young. He served extensively with Durham’s and North Carolina’s NAACP and as President of the Young Adult Chapter received national recognition for organizing voter registration campaigns, lunch counter sit-ins, job campaigns, and desegregation protests in public accommodations, schools and businesses. He chaired Durham’s chapter of CORE’s Freedom Highways Project to desegregate public facilities on Highway 1 from Maine to Florida and was a CORE South East Regional Organizer in the early 60s. He has been honored in Durham, N.C. for leadership and activism in the civil rights movement. He became a student activist at San Francisco State University, joined Students for a Democratic Society, then Progressive Labor Party; opposed the Viet Nam war, Organized a Black Anti Draft Union in the community, worked with the Black Panther Party, became a founding member of Peace and Freedom Party, Co-Chaired with Eldridge Cleaver the Black Caucus of Peace and Freedom. His activism has included workers rights, labor, education/schools, anti apartheid, police misconduct, voter registration and cultural activism.

Riley is currently a member of the California Bar Association, National Lawyers Guild, Charles Houston Bar Association, the ACLU, #BlackLivesMatter, and Black Alliance for Just Immigration (BAJI). He has served on the Boards of Global Exchange, Berkeley Jazz School, Oakland Music Conservatory and The East Bay Center For Performing Arts. Walter Riley is the Chair of the Haiti Emergency Relief Fund. He was the lead attorney for the Black Friday 14, and other #BlackLivesMatter protesters. He has received numerous awards. 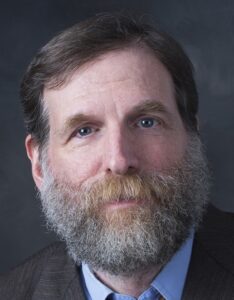 Norman Stockwell is publisher of The Progressive magazine, a one-hundred-nine year-old Madison-based progressive bi-monthly. Prior to that, he served over two decades as WORT’s Operations Coordinator. He worked at the station in music and news programming since 1983. In addition to working as a journalist in the U.S., Cuba, Nicaragua & Mexico, Norm has been involved in the collective management of two Madison institutions – Lakeside Press and Mifflin Street Co-op. He is also former Director of the Old Town School of Folk Music-Madison, and served in the 1970’s as Facilities Manager for the Northwestern University Archeological Program.

He is active in the National Federation of Community Broadcasters, the GrassRoots Radio Coalition, IndyMedia, and AMARC: the World Association of Community Broadcasters. His reports and interviews have appeared on Free Speech Radio News, Democracy Now!, and AirAmerica, and in print in Z Magazine, the Capital Times, AlterNet, Toward Freedom, the Tico Times, the Feminist Connection, and elsewhere. He is co-editor of the book REBEL REPORTING: John Ross Speaks to Independent Journalists.

Stockwell also is an experienced graphic designer and artist, and has prepared numerous successful grant applications.

Alternate Transition At-Large Directors, if any of the above decide to withdraw before new Directors are seated in 2020, are listed here